TaiKi stimulates our personal and universal 'yuan-chi'...which can only be experienced and devellopped by personal ki-training.
Under guidance of a good teacher one can learn how to move, feel, think and act spontaneously and freely....in order to stay healthy, move like a master and defend yourself adequately.

Let us first make clear our aims where we go for in TaiKi:

We want students -under good guidance- to learn how to develop and use their yuan-chi, in order to master it and:
o through TaiKiKen Ki-training we want to achieve and sustain a good mental and physical health and fitness ( Chi kung /Yang Sheng kong)
o to learn the correct use and control of our ‘yuan-chi'
in every day life as well in the fighting arts
o to move finally without hindrances and spontaneously in the Tai-Ki way of moving (mastermoving)
o to be able to act, move, feel and think free without
hindrances and to be able to express our intentions optimally (Yi-training) and to be fully ourself
o Tai-Ki-Kenpo wants to be a means towards personal growth and personality education
o to be able to defend oneself adequately and be able to fight efficiently (budo and wushu aspects)
o with Tai Ki we want to deepen the insight in the own martial culture especially and deepen the insight in and make transfer to other (martial) cultures in general.

As given to me by master Sawai Kenichi as his direct student since 1967 and appointed Kyoshi Master-Teacher and TaiKiKen Hanshi. 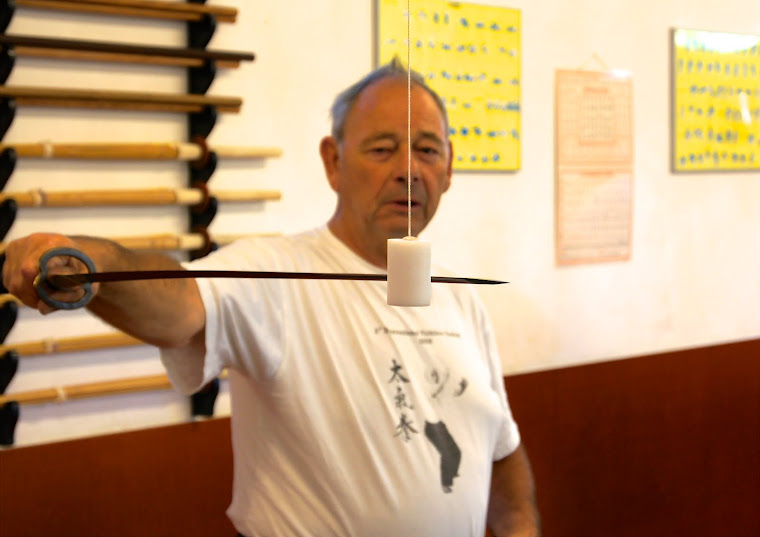 the use of the Ken leads to ulitmate precision and tuning of your actions. Just like in TaiKi 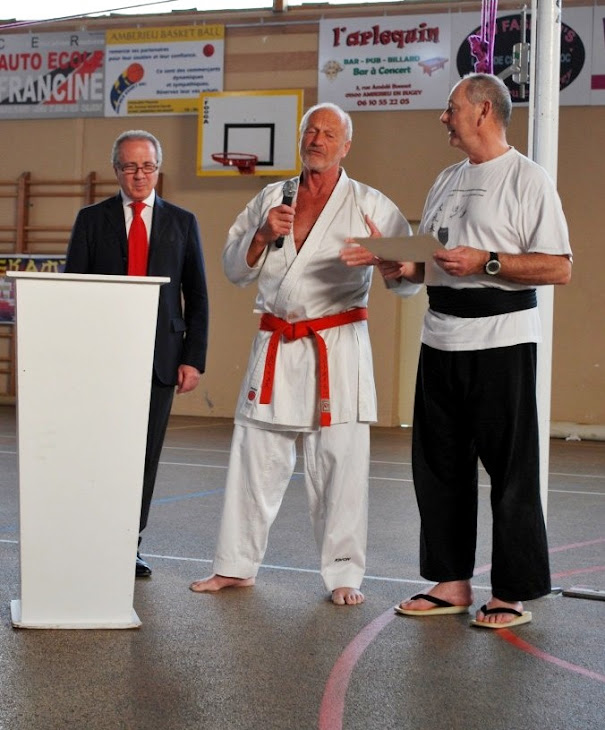 Daan Dirkson: When it was not expected at all, our dear Kyosi got surprised by sensei Gruss' initiative to honor him. We just saw 20+ karateka's got their certificate for 2th dan and up to even 8th dan, when monsieur Gilbert et le president de Fédération Européenne de Karaté Do et d'Arts Martiaux Traditionnels invited our unsuspecting teacher to grant him with a ninth dan certificate. They saved the very best for last! Congratulations Sensei Kallenbach! Sensei Gruss and Sensei Kallenbach are old opponents but became good friends and stayed in contact all those years. Both with great Budo heart and mind have made a indelible contribution to the world of Martial Arts, hence the award to our Sensei during this special event. Over 230 karate teachers and assistant teachers joined together in Amberieu en Bugey near Lyon to train with Sensei's Gruss, Bigot and Kallenbach. Different lectures were given to inspire the mainly black belt Karateka's from 8 different country's (France, Netherlands, Morocco, Belgium, Germany, Swiss, Algeria and Canada), varied by a live Budo-paint session and a Japanese drum show. The contribution of our Tai Ki ryū was very well received and created new possibilities for many of the participants in the way they look at movement in general and move in their Martial Art in specific as they told us in their feedback afterwards. This was also due to their own openness and great effort they put in to this weekend. Combined with very nice weather and a great organization this Seminaire des Professeurs d'Arts Martieux was a great success and a honor for me to be a part of. Thank you Jan. I will post some pictures for illustration. Onegai Shimasu, — with Jan Kallenbach. 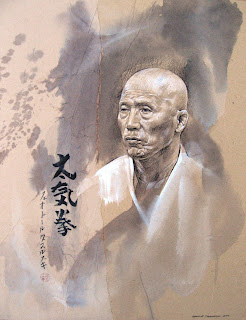 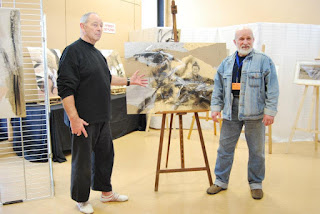 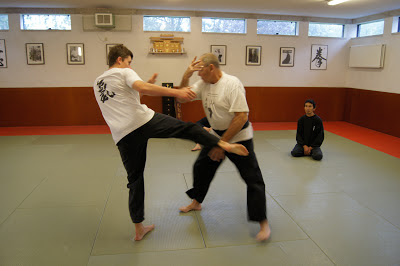 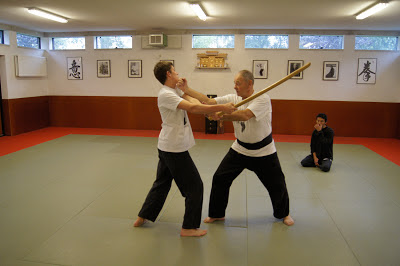 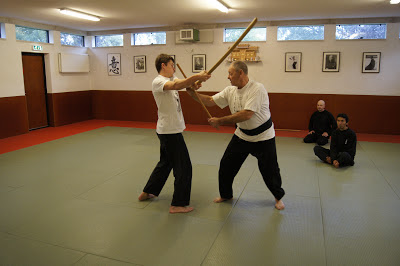 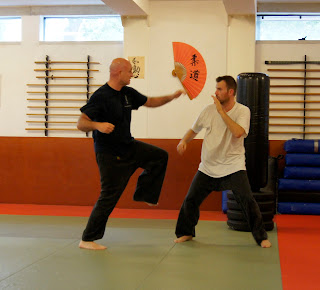 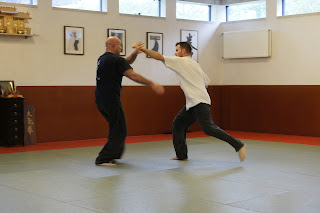 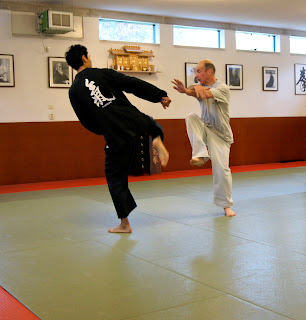 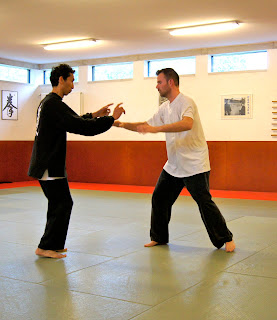 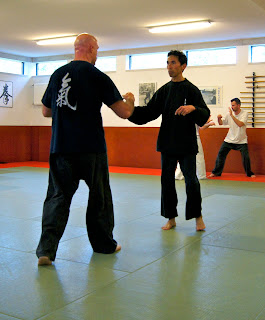 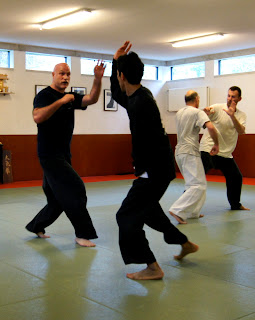 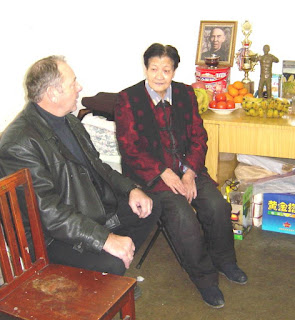 We got news from ANYDA and Jeanluc Lesueur sensei mrs. Wang Yu Fong has passed away recently on the 14th of March and at 92 years of age.

Like many other older Chinese m.a. masters and continuing in the footsteps of her famous father O-sensei Wang Chang Zhai - called China's National Fist-  she has known her hardships. Especially during the Mao regime, when during an attack by young red radical Mao followers a gang tried to rob the house and tried to molest her. She defended herself and the house bravely and made the gang withdraw, but got hurt so severly in one kneejoint...she always kept problems.
She was a brave and open women and we could talk with her frankly.

We had met her already before in France when she came teaching Yi-Chuan at Jeanluc Lesueur's dojo. We visited her later in 2003 at her home in Beijing, when we went there to make a movie about the martial arts and its practitioners. See the interesting movie made by Eline Flipse called 'Eat your Enemy' (uitg. Boeddhistische Omroep Ned.) ...in which several other special teachers were interviewd and depicted also, like master Li Yuan Ju and Otake Risuke.
Still a handsome lady with a cerain dignity, she spoke frankly with me about our roots...like the challenge master Sawai had with her father...and how Sawai sensei became his student and frequented the Wang family. 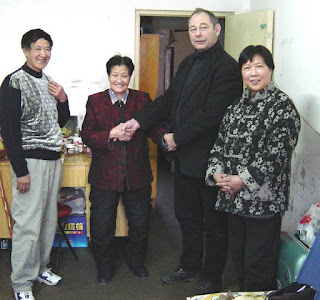 She knew everything well about this period and     spoke begninantly about Sascha san (Sawai sensei) and how he supplied them with food, when there was a crying shortage.
Anyhow a relieving sound for me hearing all this from somebody so close...especially as many modern Chinese m.a. people mostly show a tendency to describe sensei in a negative way!

We stayed a whole day with her and the Yi-chuan group, who invited us for lunch together.
A good and very inspiring moment in my life and and a very nice encouter with the pure roots of Yi-
Chuan or Ta Cheng Chuan. Above you see us both exchanging news and interesting stories. At left you can witness us with her daughter and son...both practicing Yi-Chuan and also in a medical way, as therapists. A nice family, a very interesting meeting with Wang Chang Chai's daughter and grandchildren in Beijing december 2003 and a good memory of this very special women in the martial arts.
Gepost door TaikiPotatoman op 07:10 Geen opmerkingen: 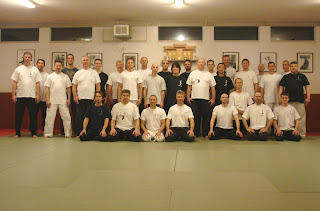 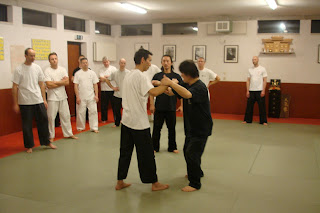 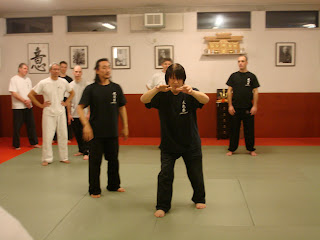 Senior Frans Befort and sensei Jan went to Orgeval.
In the dojo municipal where sensei Jeanluc Lesueur teaches regulary...we made a two days seminar.
There were students who really made an effort to
join us, as they had to come far away from the east:  from Graz (Austria) and from the south, from the
Pyrennees.

The weather was real cold, but the atmosphere outside and inside the dojo was perfect!
Gepost door TaikiPotatoman op 01:49 Geen opmerkingen: 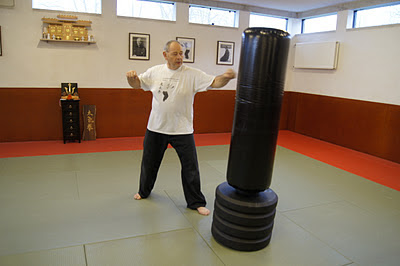 Above TaiKi punching
on our new 'Black Punching Daruma'

It gives us nice punching / kicking routines...next to the routines on our usual hanging punching bags, especially as it balances around it's loaden foot. This Daruma has 75 kg of sand in its basement.
So while attacking one always needs to create the right moment for hitting...as the upper body of this Daruma man moves around.
This Black Punching Daruma was purchased at our ' neighbours'  the AiKi budo shop in Amsterdam. 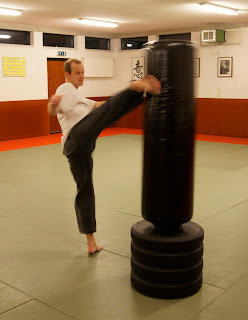 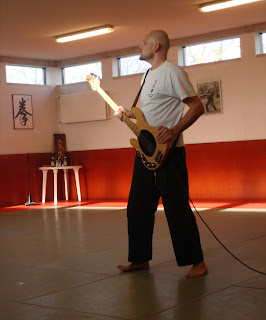 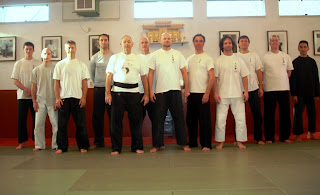 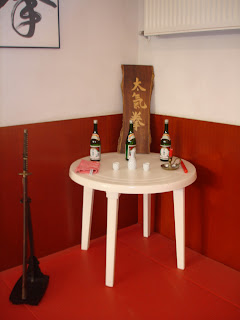 Our 2021 New Year Training, called Shin-nen Keiko.
After our traditional opening with the offering of a cup of sake by
the Seniors to the Juniors, all participants had to make a solo TaiKi practical performance.
One candidate for Seniorship Mark de Jong gave a performance with his electric bass guitar.
He displayed the special TaiKi Qualities with his guitar.
After the training and the performances we joined together for the club's New Year Reception.
Gepost door TaikiPotatoman op 14:28 Geen opmerkingen:

Dear TaiKi members....
Honbu dojo announces a new initiative
It is with pleisure we announce a special series of TaiKi training, in which we concentrate on all ins and outs of 'kumite-training', or 'sparring' training in Honbu.
There are many prerequisites coming to the full kumite form...like tuis-shou, tanshu, (pre-)arranged kumite forms and free kumite forms.
In a good dojo there will be alsways a sensei to watch and control if the practitioners are delivering a good fight!
In TaiKi honbu Seniors like to build more experience on this item...interested Juniors can join also after admittance ...and we are happy Senior Marco Kraan, TaiKi Renshi and Senior Robert den Breeijen took the initiative and sensei Kraan is leading it.
The whole activity will stay under full auspices from the TaiKi Honbu dojo and the TaiKi teachers ofcourse.
We want to organize this Special TaiKi Training on every second saturday morning of the month 5 times until summer...from 10.30 - to 12.00 hrs.... with following dates:
11 februari/ 10 maart / 14 april / 12 mei/ 9 juni....from 10.30 till 12.00 o'clock
This means we choose for incorporating this special training in our regular saturday morningtraining, with this aspect that at the choosen days...the attentions goes to the kumite-item mainly.
Regular students can join ofcourse and don't have to miss this saturday. By the way, if you do know an interested fellow- trainee take him with you to our TaiKi training.
Please understand the regular training schedule on saturdaymorning will keep same time...from 10.00 - 12.00, especially for those who want to do ritsu-zen training before.
We do hope to see you and will be joining us...and according to our TaiKi nei-chia adagium and sensei's saying ...
"not every one can become the strongest, but all TaiKi kenpoka have to strive to become the best" ...and this training will offer you the possibilities.
For further info: responsible sensei's Marco Kraan...06 55868126 and Jan sensei 06 24273476
JAN KALLENBACH
TaiKi & Yi-Chuan Master-teacher

At left a video article

This video will show the resemblances between the essence of TaiKi and the art of Iai-jutsu and Ken-jutsu.
In the memory of the teachings of O-sensei Sawai Kenichi and my eminent Iai-do teacher master Kuroda Ichitaro.
Teacher of the Kidotai Police Forces in Tokyo, where I trained iaid-do and jo with him and met sensei Donn Draeger and Kaminoda who taught there also 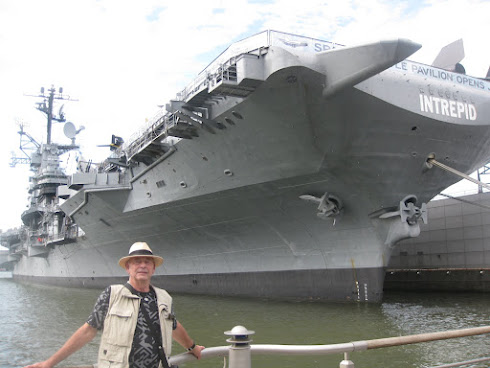 from the 3th of Sept. we start again 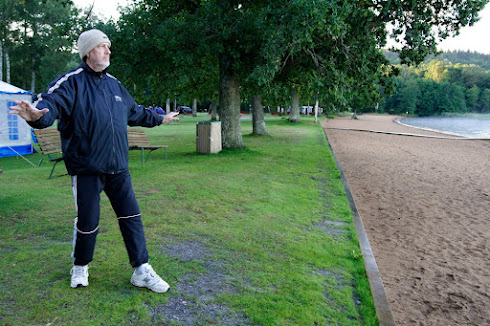 sensei MacDonagh has been suffering quite some medical set backs last year, on behalf of TaiKi Europe and Shin-ShinBuken TaiKi Honbu members...we want to wish him good luck with his further recoverage! On the picture you see him at the border lake of Lygnared where we had 5 fantastic Gasshuku's.

the TaiKi Honbu Dojo is located in Shin-ShinBuKen Amsterdam. This TaiKi school is fully qualified and recognized by the original Oriental TaiKi masters and hence known as European TaiKi Honbu.(Headquarters-dojo)... Lod.van Deyssel str.107 Amsterdam West tel.: 020 6112527. TaiKi Training on Mon-Wedn.evening from 18.00 til 20.00 hrs. and Saturday from 10.00- 12.30 hrs. After appointment!

In daily speaking this became Tai Ki Kenpo, with this notion that sensei had changed the original Sei-character (Cheng)
into 'Ki', as he found this character more urgent and expressing the real essention of his budo.

Later on Tai Ki Ken came into use and even 'Tai Ki'. People sometimes, out of convenience, do write the three characters close together. Actually they do form three independent characters. Afterall sensei did not bother too much, as he found Tai Ki Ken perfectly expressing he and his budo stood for: 'Great Ki Boxing' . 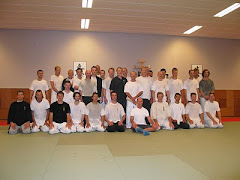 TaiKi training looks for Balance in every way

Here we are showing the feeling which Effort is needed actually to stand still, calm, balanced, yet relaxed and 'open' for things happening

Headmaster of the TaiKiKenpo School. Sensei mostly taught and trained in plain clothes and near trees. So we trained outiside in the Meiji Park; nowadays central-training takes place in Yoyogi.